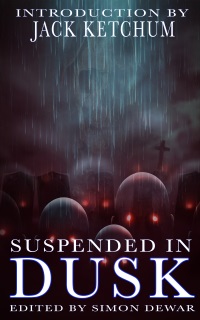 Suspended in Dusk is finally out! My writing pal Simon Dewar collected and edited this despite all the exciting pitfalls of ‘My First Anthology Project’ and while eyeing off the impending Twinpocalypse looming down on his family. There are a bunch of amazing authors in here who are much more famous than I, and so my path to glory on the coattails of my peers continues. *coughs*

Here are some things being said about it already:

“Disquieting and at times terrifying, SUSPENDED IN DUSK shows that horror can, and should, have substance.” ~ Kaaron Warren, Shirley Jackson Award winner, and author of Slights, Mystification, Walking the Tree.

Jack Ketchum wrote a great introduction too. I’m so excited to be in this thing. And I love the creepy cover.

I’ve previously linked to a post Simon wrote about what he learned on this project here.

Electronic copies are out here and here. Other electronic and print editions are on their way.

My story is about the mindbreaking loneliness of being stuck all by yourself on a mission to Mars, and here’s a little random snippet out of it:

When the communications shorted out three months into the journey, it was Donovan who cracked first. He’d slipped into a twenty-five hour day. I’d read about that in Mars500 too. About twenty percent of the time he was the only crewmember awake. That’s no way to live.

It was silly of him, really. And unprofessional. We’d all done this before; we’d each spent six months inside OPSEK, completed EVA training and yawned through half-trip versions of the Mars500 project in the early twenties. We knew there was a fully automated base on Mars waiting for us; I’d watched the videos of the robots assembling the damn thing. There were supplies and radios and orbiters to relay our signals via the Interplanetary Internet. There was plenty of research to do, and the promise of other settlers on their way, eventually; a Hohmann transfer orbit like ours needs Earth and Mars to be aligned just so, and that only happens every two years, so it would be a while before they came. We literally fall around the sun to reach Mars, a straight line through curved gravity wells. Ain’t physics grand?

We passed all the psych tests. We did our solitary confinement. We drilled our exercise routines to make sure we kept our bodies toned as well as we could.

But there’s something about where we are, where no human being has ever been, that seared away our preparation.

OPSEK drifts a hundred miles or so above the earth. The proud astronauts who walk on the Moon are three days away, no more than a light second.

But we’re far away; we’re far away and a tiny, insignificant bubble of heat and life and thoughts. Mission control would take minutes to reach us. All that’s left to remind us of home is the little network handshake light that blinks on the navigation computer, but we can’t communicate. We’re now further from Earth than the Earth is from the Sun. There’s not another soul for over a hundred thousand thousand kilometres around me.

No one can catch us; no one can stop the ship. It has to fall all the way to Mars.

2 thoughts on “‘Suspended in Dusk’ launched!”

This site uses Akismet to reduce spam. Learn how your comment data is processed.